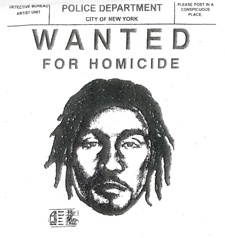 Police Officers Carlos Hernandez and Sirlister House responded to a "10-30 man shot" radio call at around 1:33 PM, at Frederick Douglass Boulevard on January 27, 1998. Upon entering the building, they found Albert Ward lying on the floor with a gunshot wound to his head and a gun between his legs. Officer Hernandez immediately called for Emergency Medical Services. Officer Hernandez then spoke to a witness who reported that the shooters were two black males, one with a green jacket and one with a yellow jacket. Hernandez called in the description of the perpetrators to "central."

The Crime Scene Unit conducted a search inside the numbers spot and recovered one spent round, two spent shells and one live round. The .38 caliber revolver belonging to Albert Ward was recovered and was found to contain one spent cartridge casing and four live rounds in the cylinder. three pieces of duct tape, a roll of duct tape, two pieces of paper, two envelopes and a bundle of 13 envelopes were removed from the scene for possible fingerprints. It was determined that there were no prints of value on these items. Additionally, two latent palm prints were lifted from the mirrors, another latent palm print was lifted from the edge of the bar and a single latent fingerprint was lifted and later submitted to the Statewide Identification System (SAIFIS) and determined to be the print of Phillip Jones, one of the witnesses.

Upon learning that the victim was a retired Member of The Service, the NYPD immediately established a Field Command Post on Frederick Douglas Boulevard between West 125th and 126th Streets. The command post was in place by 5:00 PM on the evening of the shooting and four lieutenants, eight sergeants, and thirty-seven police officers from the 28th Precinct and Manhattan North Task Force were assigned to the post to conduct enforcement activity at known narcotics locations. Fifteen arrests and seventy-five summonses were issued. By the evening the police had interviewed five of the nine witnesses present at the location of the shooting, had leads on the whereabouts of the remaining four and had approximately 150 debriefings of individuals.

At 5:00 PM, the NYPD notified Citywide Communications Unit to broadcast a description of the two perpetrators. The description given of the shooter was "male black, light complexion", 20-25 yrs, 5'7 - 5'9, 150 - 155 lbs., beard, mustache and goatee, braids, wearing yellow or orange bubble jacket." Hospitals throughout New York City, Northern New Jersey, and Long Island were canvassed to check for individuals with gunshot wounds, based on the information they had that, although Albert Ward had fired his gun, no bullet had been recovered at the scene.

At 11:00 PM on January 27, 1998, witness Robert Jones was taken by the police to police headquarters and a sketch was drawn of the shooter based upon a description given by Mr. Jones. The sketch was distributed to the surrounding precincts on a "WANTED" poster that described the shooter as "male, black, 20-25 yrs old, 5'7 - 5'9, 150 - 160 lbs, braided hair, light complexion, thin mustache/beard, wearing an orange / yellow 3/4 length jacket."

Sweeps of police locations revealed that there were several unreported robberies of these spots that may have been perpetrated by the same individuals. A robbery at one of these locations - 1412 Fifth Avenue - was found to have similarities to the incident in question and it was reported that one of the witnesses to the robbery identified the person in the "WANTED" poster as being the perpetrator.

If you have any tips or leads in regards to identifying "Mustafa" and the solving of this case, we urge you to contact us by email at info@freejonadrianvelazquez.org.