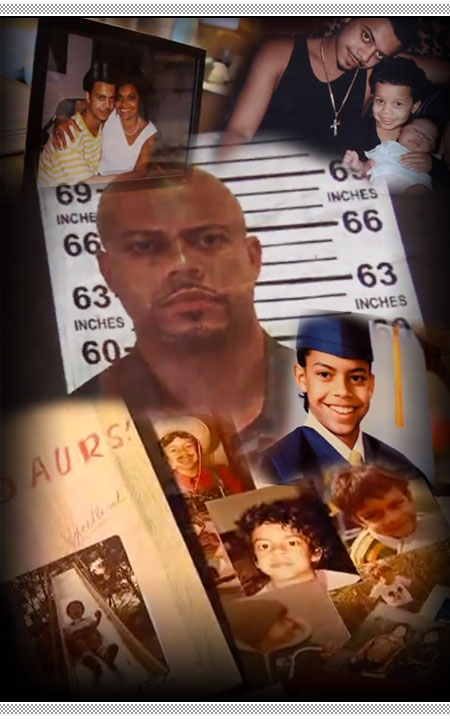 Jon-Adrian Velazquez is a loving father of two, who has dedicated himself to the service of others despite his present circumstances. He has maintained his innocence from the outset of this case and has managed to maintain strong family ties. In addition, he has participated in numerous Volunteer Programs geared towards helping prisoners build the social blocks of personal development in order to enhance their potential of successfully reintegrating into society.

He is among the small group of inmates living on Sing Sing's Honor Block. Honor Block houses less than 100 inmates who have gone years without a single disciplinary citation.

He has not allowed time to interfere with his growth and development, nor has he allowed his unjust incarceration to make him a bitter person. To date, Mr. Velazquez has earned his Bachelor's Degree in Behavioral Science in the Hudson Link for Higher Education Program at Sing Sing.

Additionally, he has been recognized as a diligent hard-working leader who was appointed to a number of departmental positions in the Inmate Liaison Committee, the Family Reunion Program, the Youth Assistance Program and now the Liaison for Hudson Link.

Lately, he has played an integral role in the development of the Forgotten Voices Committee, which has established a progressive network between conscious prisoners, elected officials, and multiple community clergy leaders of different denominations.

On February 2, 1998, after learning that he was being sought for the shooting of a retired police officer, Mr. Velazquez attempted to vindicate himself of the allegations by voluntarily subjecting himself to a lineup that has caused him to lose almost fourteen years of his life. The clock is still ticking as he awaits the relief he rightfully deserves.

Out of nine eyewitnesses present at the scene of the crime, three identified him at the lineup. Since then, two have recanted, and the other eyewitness has expressed serious doubts. At trial, two additional witnesses showed in an attempt to bolster the prosecutionâ€™s case. However, one selected a juror as the gunman in the courtroom instead of Mr. Velazquez. The other witness was a homeless person with an admitted chronic drug history, who was provided with shelter, money, and clothing in exchange for his testimony. Since then, he has also conceded that he certainly could have made a mistake in identifying Mr. Velazquez.

Even more significant to the instant case is the tangible evidence which reveals that Mr. Velazquez's conviction was based on highly unreliable eyewitnesses identifications and improper police procedures. Each eyewitness was Black and unanimously identified the shooter as a light-skinned BLACK male with long braids within hours or days of the incident. However, these witnesses were subsequently instructed to view a lineup which did not consist of any BLACK males.

Instead, the identifying witnesses were assured that "they got the right guy", even after individually raising concerns about his appearance. Mr. Velazquez is clearly a HISPANIC male who has never worn a braided hairstyle and does not even slightly resemble the physical and racial characteristics of the person described to the police. In fact, substantial evidence has since been revealed that the police failed to conduct an exhaustive investigation concerning another individual who was originally identified as the shooter by multiple sources.

In essence, Mr. Velazquez's suffering is due to a conviction that relies solely upon eyewitnesses that have now expressed doubts and recanted. Moreover, there is no physical or circumstantial evidence linking him to this crime.

Indeed recently acquired evidence not only points to an 'alternative'suspect who fits the initial description provided by witnesses but also was reportedly the PRIMARY TARGET of the police investigation.

There can only be one reasonable conclusion:

Every day Mr. Velazquez spends incarcerated is a miscarriage of justice and grossly undermines any true concept of American justice because Jon-Adrian Velazquez is actually an innocent man.

Mr. Velazquez is currently incarcerated in Sing Sing prison awaiting the decision of the Conviction Integrity Unit, a special division of the Manhattan District Attorneyâ€™s Office, headed by Bonnie Sard under the administration of Cyrus R. Vance, Jr. This unit is the product of a promise Mr. Vance made ensuring that he would review procedures that will serve to minimize wrongful convictions during his tenure as the new Manhattan District Attorney.

The Conviction Integrity Unit was established in 2010 as a result of the alarming rate of wrongful convictions that have recently surfaced. The purpose of this unit is to review past cases to determine if mistakes have been made ... [where] meaningful claims of innocence are presented. On Thursday, October 6, 2011, Mr. Velazquez's attorneys, made a scheduled meeting with Ms. Sard to discuss the grave injustice that destroyed an innocent man's life.

Mr. Gottlieb, a member of the New York State Bar Association's Task Force on Wrongful Convictions, has openly declared in the New York Times that, This case is tailor-made for the Conviction Integrity Unit. To this end, this case demands further attention by the People of New York and the citizens of our entire society.